Join U-Report, Your voice matters.
Join Now
STORY
“I want to look back and say I was a part of the generation that helped address climate change” 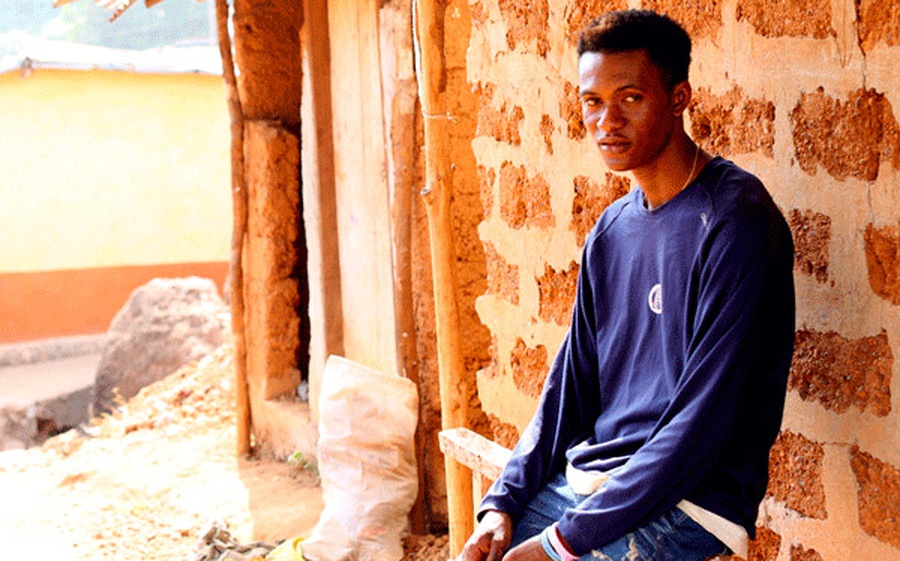 15 February 2021, Freetown - Just a few years ago, picturesque mountains and lush greenery adorned the fields surrounding communities in Freetown, the capital city of Sierra Leone. Most of the greenery has since disappeared and has been replaced with structures providing shelter for the city’s ever-growing population.

One such communities is Looking Town, a neighborhood in Kissy, in the east end of Freetown. This is where 22-year-old Bai Kamara has lived for most of his life and has witnessed the drastic changes that are taking place to the environment which he dearly loves.

“A couple of years ago, all we could see were trees and grass. Now this has all been replaced by houses,” said Bai, who is a U-Reporter and young climate change awareness champion.

A big riverbed divides Bai’s house and that of his neighbor. The riverbed is littered with debris and garbage which is indiscriminately disposed by the residents of Looking Town. The natural flow of water has been disrupted by this debris, while flooding is a common occurrence during the rainy season.

“This riverbed has also become a breeding ground for mosquitoes during the dry season, because it has been turned into a dumping ground,” says the articulate Bai, who is passionate about sharing information about his community, with the hope that there can be changes to stop the deterioration of the environment.

As is the case in dozens of other countries around the world, environment degradation has resulted in communities across Sierra Leone experiencing adverse climate conditions. Floods and landslides are a common occurrence during the raining season, while off-season rains have led to unprecedented loss of lives and property and has adversely affected agricultural activities. More than 1,000 lives were lost in 2017 alone when flash floods swept through some parts of Sierra Leone during the rainy season.

Last year, Bai, who stays with his brother and his family of five, had a firsthand experience of the effects of climate change. Looking Town experienced flooding, which led to the loss of property including electricals, electronics and food items. School children also had their school stationery and uniforms washed away during these floods.

Despite the alarm bells such as reduction in river flow and extreme hot weather that have been ringing, people seem to care less and are carrying on with their lives as usual. In Bai’s neighborhood, people do not seem to be aware of how disruptions to the environment are influencing climate change. Activities such as tree felling for purposes of coal production, are continuing, while little attention is paid to the continued dumping of waste into the rivers.

This prompted Bai to start a climate change awareness raising drive, which he says is still to make the desired difference in the community.

“I’ve been trying to stop people from throwing trash in the water way and talk to them about proper disposal of their household garbage, but they hardly listen,” said Bai. “It’s probably because the laws are not being enforced,” says this young man who is fully aware that these damages to the environment will have a negative impact on the kind of life that he will live in years to come.

A riverbed in Looking Town, which has been turned into a garbage dumping spot. ©UNICEF/Sierra Leone/2021/Mason

The results of climate change due to the development of infrastructure, mining activities and poor waste disposal have also significantly affected the quantity and quality of water that residents get from the surface runoffs and the natural water-springs, which used to be the main sources of water.

“Most times we have to wake up before dawn and trek to a nearby hill to get into the queue for clean water before it gets long. That’s the only way we can be sure of fetching water for the day’s use,” said Adamsay, Bai’s sister-in-law, as she explains the impact that environmental degradation has on their day to day living.

Asked how he thinks issues around climate change can be addressed, Bai responded that young people should be engaged and encouraged to play their part by raising awareness in their homes, schools and communities.

“We should be empowered and given the space to connect with our peers and raise our voices and speak against the actions that fuel climate change and its devastating effects on us,” he said. “When I’m older, I want to look back and say I was a part of the generation that helped address climate change. I plan on studying environmental law in university so I will be better equipped to help protect the environment.”

Bai also suggests that stiffer laws should be instituted to discourage harmful practices such as tree felling and coal production, and alternative sources of livelihood provided, especially for coal producers. These, he added, will go a long way in addressing climate change issues in Sierra Leone and reducing its potential impact on agricultural production, water resources and human health and disasters.

As a U-Reporter, Bai is happy that he gets to interact with U-Reporters, from other parts of the country, who might have solutions of how they are tackling climate change issues in their communities. “Thanks to U-Report, I can boast of increased knowledge of several social issues including climate change. I believe it is a great tool that would facilitate efforts to address climate change in my country, especially awareness raising initiatives targeted at young people.”