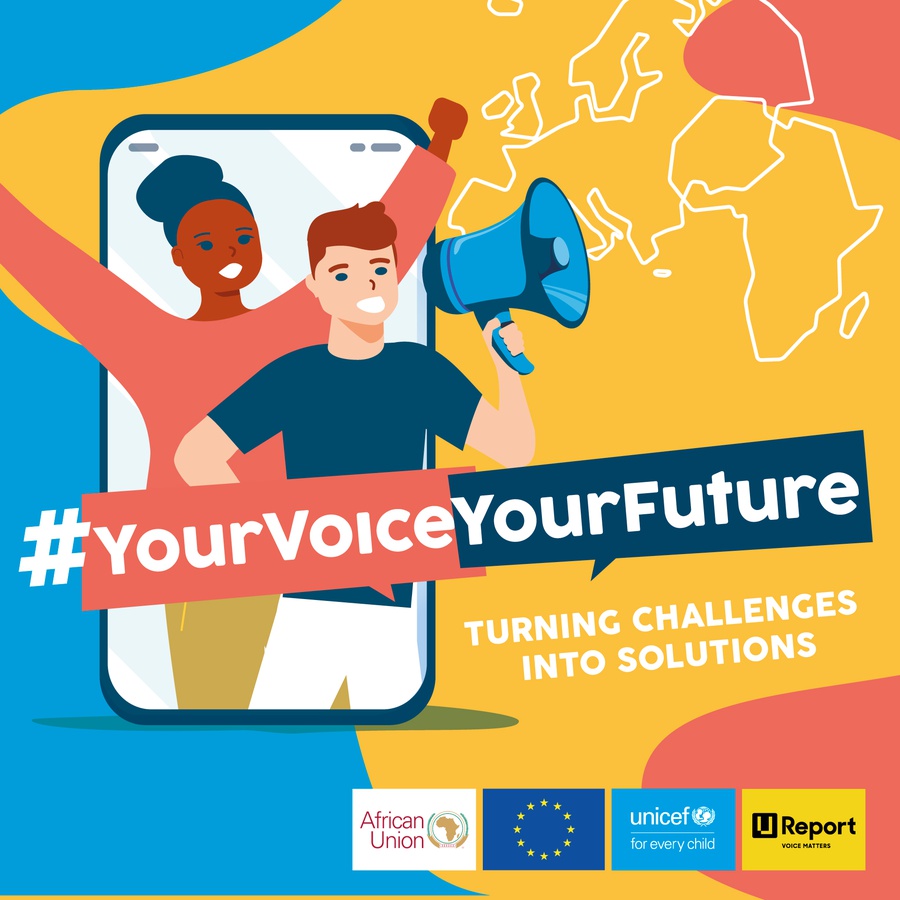 22 January 2021 - Participation in decision-making, quality education, internet access and the climate crisis are among the main concerns for children and young people in Africa and Europe, according to U-Report polling data released today by UNICEF, the African Union (AU) and the European Union (EU)

Almost half of all young people polled feel excluded from political decision-making processes that affect their lives, the poll findings show. While an overwhelming majority of the polled young people (91%) would like to have more say in the political decisions that shape their lives, 48% feel completely left out. The main obstacle they cite (59%) is lack of access to policymakers.

The findings are included in the report #YourVoiceYourFuture, a joint effort between the AU, EU and UNICEF that brings together results and recommendations from four U-Report polls across Africa and Europe. Altogether, 450,000 young people between 14 and 35 years old voiced their views on key topics that affect their future and are relevant to the partnership between Africa and Europe.

“Young people have a rightful seat at the decision-making table. They are the agents of change who with us build today a better tomorrow. We need to hear from them, but that is not all we must do. We must engage and empower youth to be involved in decisions affecting their lives,” said Jutta Urpilainen, European Commissioner for International Partnerships.

Young people may feel let down by traditional politics, but they are finding alternative ways to engage with and mobilise their peers. A large majority (88%) say they feel responsible for tackling climate change, while 71% actually want to play a role in the green transition. Some 65% of respondents say they are active within a youth network or organisation in their community.

“In the midst of all the challenges being faced in the advent of the ‘new normal’, few things have remained constant – the unwavering resilience, energy and ingenuity of young people across the world. Now more than ever, it is clear that young people are integral to the recovery, progress and sustainability of this world,” said H.E Prof. Sarah Anyang Agbor, AU Commissioner for Human Resources, Sciences and Technology.

Children and young people have a right to be heard on the issues that affect their lives, whether education or climate change. With the #YourVoiceYourFuture campaign and the four U-Report polls, the European Union and the African Union joined forces to explore new ways to engage with young people, to inform policy making, create interest around youth issues, and bring young people and decision makers closer together on both continents. The results of the campaign will inform the agenda of the Africa-Europe Youth Summit 2021, and will ultimately feed into the next AU-EU Summit of Heads of States and Governments. “When children and young people speak, the world should listen,” said Charlotte Petri Gornitzka, UNICEF Deputy Executive Director. “Whether their countries are rich or poor, at war or in peace, their demands are the same: A better say in decisions affecting them, a healthier planet, and better opportunities. At a time when so many hopes have been dashed due to a raging pandemic and rising poverty, this is not too much to ask.”    The #YourVoiceYourFuture report covers U-Report poll results and recommendations on the topics of climate change and the green transition; digital transformation and social infrastructure; education, skills and decent jobs, and; governance, peace and security. Some of the main findings included in the report are:

The #YourVoiceYourFuture campaign is an initiative launched by the African Union, European Union and UNICEF to hear directly from young people about their opinions on key topics affecting their future and relevant to the partnership between the two continents. You can download the report #YourVoiceYourFuture here.

About the U-Report pollsThe polls were conducted between July and September 2020 through U-Report, a global digital youth engagement platform developed by UNICEF and partners. The respondents are not a representative sample of young people in Africa and Europe, because they do not come from a full range of demographic groups, countries of origin or current geographic locations. Most respondents were from Africa, mainly because there are fewer national U-report platforms and fewer U-reporters in Europe. On average, 68% of the responses were from boys and young men and 32% from girls and women.

About the AU-EU PartnershipThe AU-EU Partnership is a partnership through which the African Union and European Union work together, engage in political and policy dialogues, and define their vision and cooperative relationship in a globalised world. Established in 2000 at the first Africa-EU Summit in Cairo, the partnership is guided by the Joint Africa-EU Strategy. Joint priorities include sustainable economic development, digitalisation and skills development, job creation, climate change, global security and peace. Youth is a priority for both the EU and the AU. The ambition of the future AU-EU partnership, which will be newly defined at the AU-EU Summit in 2021, is to continue taking youth views into account by including them in policymaking and facilitating their active participation in the implementation of the partnership.

About UNICEFUNICEF works in some of the world’s toughest places, to reach the world’s most disadvantaged children. Across more than 190 countries and territories, we work for every child, everywhere, to build a better world for everyone.