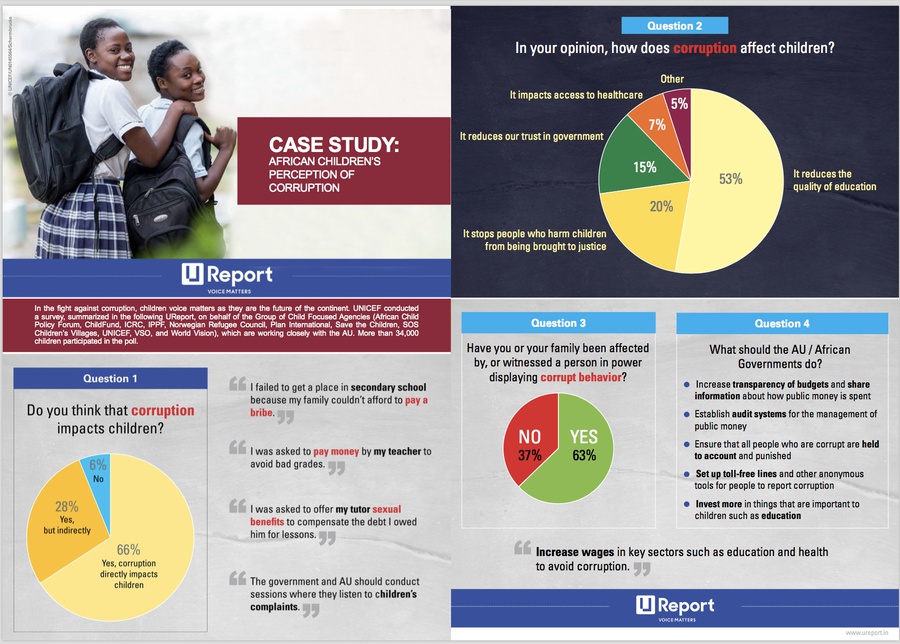 In a recent U-Report poll of 34,000 children and young people, 94 per cent called for concrete steps to end corruption and increase investment in services for children and their families.

Using U-Report, a tool which allows users to give feedback in polls and report issues in their communities, a survey was sent to children and young people in three African countries. The African Union theme for 2018, ‘Winning the Fight Against Corruption’, provided the context for the questions that children answered on their mobile devices.

The U-Report survey was commissioned by the African Union Commission and a group of child-focused agencies working closely with the AU. The findings of the survey are being shared as African leaders come together for the 2nd meeting of the African Union Specialized Technical Committee on Finance, Monetary Affairs, Economic Planning and Integration which is taking place in Addis Ababa between 12-17 April 2018.

“Investing in our children is essential for Africa’s social and economic development,” said Goitseone Nanikie Nkwe, Chairperson of the African Committee of Experts on the Rights and Welfare of the Child. “Children are telling us that corruption is stopping them from getting the services that they need. We must heed their warning and take action to end corruption once and for all so that future generations can realize their full potential.”

“Millions of children and young people in Africa are being denied their right to education, healthcare and decent future due to corruption,” said Mr. Stephen Omollo, Regional Leader, World Vision East Africa, on behalf of the organizations that commissioned the survey. “Children have sent a clear message to those in power to put mechanisms and legislations in place to stop corruption and ensure that public resources reach children, especially the most needy.”

Ahead of the survey results being published, AU Commissioner for Social Affairs, H.E. Amira El Fadil said: “The Department of Social Affairs welcomes the initiative [and] looks forward to receiving the findings of the survey and exploring ways to incorporate children’s perspectives and ideas throughout the year”.

Key findings of the poll:

Many children have experienced corruption in their daily lives

·       63 per cent of respondents said that either they, or a family member, had been affected by corruption.

·       Many children and young people shared stories of having to pay bribes to access public services such as education and healthcare.

·       Some girls even said that they had been asked to trade sex for good grades.

Children are very concerned about the negative impact of corruption

·       94 per cent of children said that corruption is having a negative effect on their lives.

·       Half of the girls and boys identified education as the top area of concern, believing that corruption reduces the quality of their education.

·       The second area of concern was justice for children: 20 per cent of children believe that corruption stops people who harm children from being brought to justice.

·       Children also believe that corruption impacts their access to healthcare and reduces their trust in government.

·       U-Report respondents felt that there was much more that governments and policymakers could do to stop corruption. Children called upon the African Union and African Governments to take a number of actions, including:

o   Establish audit systems for the management of public money

o   Increase wages in key sectors such as education and health

For detailed report visit the link below: (Caution, File size over 8 MB)