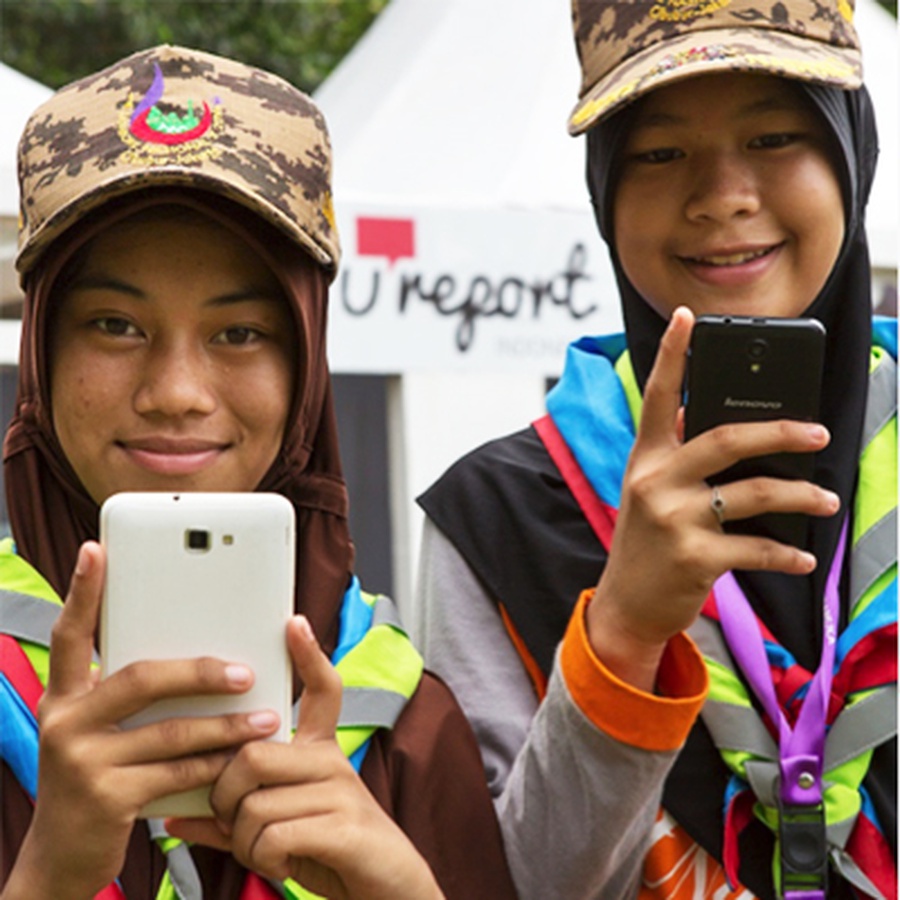 UNICEF Indonesia and Pramuka, the world’s largest national Scouts movement with 20 million members, kicked off an ambitious partnership aimed at engaging the Scouts membership to address some of the country´s key development challenges through the digital youth participation platform U-Report and through offline activities at community level. During the Jamboree, some 2,000 Scouts from all over Indonesia joined UNICEF´s sign-up sessions to become U-Reporters and make their voices heard by the country’s decision makers.

Indonesia is one of the more than 20 countries that already launched the free SMS and social media-based application U-Report developed by UNICEF to amplify the voices of youth and allow them to communicate, share information and opinions as well as vote on local issues. More than 27,000 young people are already active on U-Report in Indonesia.

During the Jamboree UNICEF ran interactive sessions on U-Report and on child rights. Hundreds of Scouts participated in the meetings each day, where UNICEF staff explained what U-Report is all about and how to use it to communicate and share information on issues related to children’s rights.

Aidha, 14, and Sausa, 14, from East Java also signed up be a U-Reporter. “We understood that U-Report will help children to express their opinion to the public,” they explained. When told that their responses on U-Report will be shared with the government and other decision makers, the girls got even more excited.

Indeed, it is these young minds that can help shape the country’s policies in the years to come. U-Reporters in Indonesia already participated in a global poll on climate change for the COP21 Climate Change Conference in Paris. Moreover, UNICEF used U-Report to gather children’s and adolescents’ opinion on the National Strategy on the Elimination of violence in childhood, which was launched by the Government this year. Around 4,000 children and young people aged 14-25 years participated in the poll.

At the Jamboree, Indonesia’s President Joko Widodo highlighted the vital role young people play in the country’s development and called on them to be strong, brave and positive. He also stated the importance of information technology and its proper use by young people. “As a big nation, Indonesia has big challenges to solve, including poverty and social disparities. That’s why our young people need to be more positive and resilient to have a competitive advantage. I encourage the Scouts movement to remain relevant by using the rapidly growing information technology. However, social media is not a tool for you to hurt or bully each other,” the President said.

Indeed, bullying has become a crucial topic to be discussed by Indonesia’s U-Reporters. According to estimates, some 50 percent of children in the country experience bullying at school. These statistics are important to understand the scope of a problem and its impact on children’s well-being so that the government and other stakeholders can make an informed decision to stop these harmful behaviors. U-Report Indonesia conducts weekly polls on topics such as these and ensures that the voices of poll participants makes their way to decision-makers.

“We were delighted to have an important role during the 10th National Scouts Jamboree and to be able to spread the word about U-Report,” said UNICEF Representative Gunilla Olsson.” It is so important to include adolescents and young people in decision making processes that affect them so they can influence positive change. U-Report helps them do exactly that”.

As part of a comprehensive partnership agreement, UNICEF and Pramuka will work together on three priority areas for both organizations - prevention of violence against children, improving the nutritional habits and practices of adolescents and ending open defecation, a harmful practice that contributes significantly to child illness and mortality in Indonesia.

In implementing these programmes throughout the country, U-Report will play a major role in monitoring and assessing the results of the work on the ground. U-Reporters also have the opportunity to share their concerns and ideas on many others topics that are important for them.

“UNICEF and Pramuka share common goals and focus on similar topics and problems affecting children and young people in Indonesia. The communication platform U-Report is at the heart of our partnership,” said Gunilla Olsson.