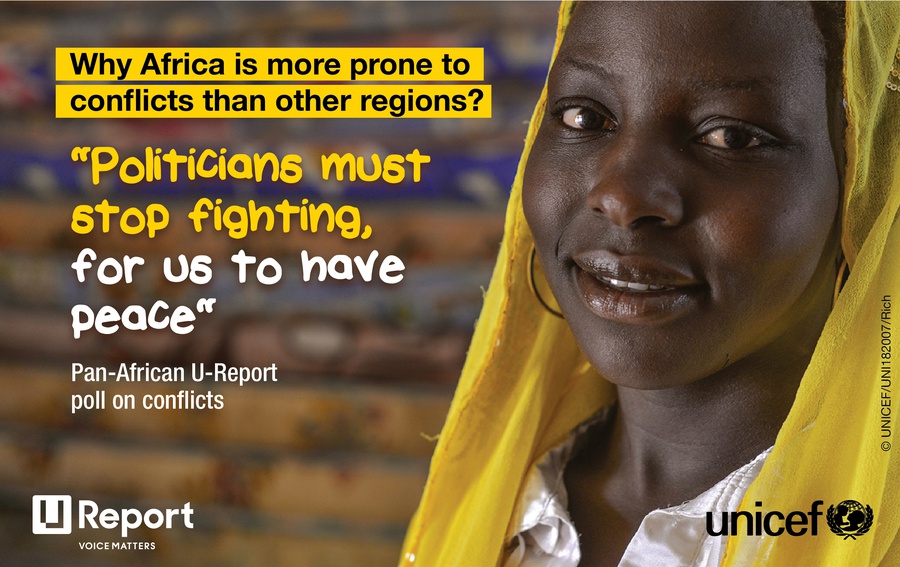 African leaders are not doing enough to prevent and end conflicts, says African youth in the first pan-African U-report poll. The survey was conducted ahead of the Day of the African child which is commemorated every year 16 June. Two thirds of the respondents thought African leaders should do more to end conflicts on the continent.

U-Reporter is for speaking out on issues that affect young people everywhere. In Africa this is no exception, as for commemorating the Day of the African Child (June 16), 9 countries engaged their youth simultaneously on a coordinated poll on what African leaders are doing to stop conflict and crisis. Close to 86,000 U-Reporters from Nigeria, Burkina Faso, Mali, Central African Republic, Senegal, Liberia, Zimbabwe, Cameroon and Guinea, joined their voices to be heard by their regional authorities.

Humanitarian crises in Africa continue to spill over borders in recent years, with children and families increasingly on the move. In recognition of this crisis across the continent UNICEF and its partners wanted to better understand what young people, Africa’s future leaders, think of the state of affairs. U-Report was able to amplify the voices of Africa’s young people by conducting its first ever U-Report Pan-African poll.

Some of the key findings from U-Report poll were:

“The lives of millions of children and their families are disrupted, upended or destroyed by conflict every year in Africa,” said Manuel Fontaine, UNICEF’s Regional Director for West and Central Africa. “This survey speaks to every child's right to be heard and gives African youth an opportunity to express their hopes for the future of their continent.”

Humanitarian crises in Africa continue to spill over borders in recent years, with children and families increasingly on the move. More than 1.2 million people face insecurity in the Central African Republic due to a complex humanitarian and protection crisis that has spread to neighbouring countries. Nearly 1.3 million children have been displaced by violence linked to the Boko Haram insurgency across Cameroon, Chad, the Niger and Nigeria. Two years into the conflict in South Sudan, nearly 2.4 million people have fled their homes, including 721,000 living as refugees. Burundi is facing a protection crisis that has driven some 265,000 people to flee across borders.

U-Report’s Pan-African poll provided, for the first time, a platform for young people to express their concerns about these far reaching humanitarian crises. Their responses were amplified in a tangible way through advocacy with key decision makers from the African Union. As the U-Report community continues to grow there is an increased opportunity to bridge the divide between the social discourse and decision making with a hope to make a marked change in the communities in which it operates.

The results of this U-Reoport action will be presented to African leaders at the Day of The African Child commemoration in Gambella Ethiopia. UNICEF will encourage African leaders to welcome the messages from the youth and turn them into action.